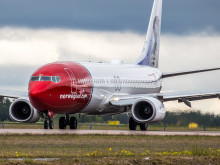 Norwegian Air said on Wednesday it has asked an Irish court to oversee a restructuring of its debt as it seeks to stave off collapse amid the coronavirus pandemic.

“Norwegian will also enter in and get protection of the Irish Examinership process as a related party.

“Norwegian has chosen an Irish process since its aircraft assets are held in Ireland.

“Norwegian has taken this decision in the interest of its stakeholders.

“The purpose of the process is to reduce debt, rightsize the fleet and secure new capital.

“This reorganisation process protects the assets of the Norwegian group while allowing the company to focus on the rightsizing of the group.”

The process is estimated to take up to five months.

Norwegian said it will continue to operate its route network — currently limited due to the Covid pandemic — and trade as normal on the Oslo Stock Exchange.

Norwegian CEO Jacob Schram said: “Seeking protection to reorganise under Irish law is a decision that we have taken to secure the future of Norwegian for the benefit of our employees, customers and investors.

“Our intent is clear.

“We will emerge from this process as a more financially secure and competitive airline, with a new financial structure, a rightsized fleet and improved customer offering.”