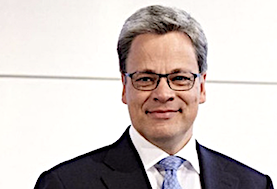 Germany’s Commerzbank has poached a senior executive from larger rival Deutsche Bank to be its new chief executive after months of turmoil.

Commerzbank appointed Manfred Knof, 55, as successor to Martin Zielke at the weekend.

Knof has earned a reputation as a tough cost cutter — and analysts expect him to drive a change in strategy at Commerzbank that may lead to up to 10,000 jobs cuts.

Bloomberg News has reported the bank is currently working on a new strategy that may close as many as 800 retail branches and scale back the bank’s foreign presence — in addition to the big workforce reductions.

The appointment of Knof means the bank may soon be able to move ahead with adopting and presenting the new strategy, Bloomberg reported.

Commerzbank wanted to merge with Deutsche Bank last year but talks broke down.

Zielke resigned early in July after a revolt led by private equity investor Cerberus, one of Commerzbank’s largest shareholders, which has been pressing for big changes at the bank.

Hans-Jörg Vetter, chairman of the supervisory board of Commerzbank, said: “I am pleased that we have been able to win Manfred Knof for the role of Commerzbank’s CEO.

“Manfred Knof is an experienced and highly effective top manager who has proven himself in a wide range of tasks in the financial services industry.

“He brings the necessary expertise and human leadership skills for the tasks that lie ahead of the bank.”

Knof said: “I have a great deal of respect for this new assignment.

“Commerzbank, with its Mittelstandsbank, has a high relevance for the German economy.

“Its Private Clients Business has shown a very innovative approach.

“And Commerzbank has a unique culture that I am very much looking forward to.”

Until 2017, Knof was CEO of Allianz Deutschland AG.