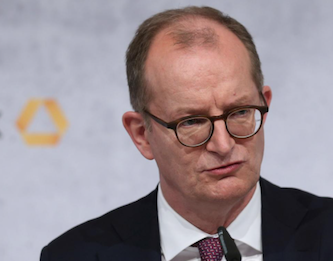 The chief executive and chairman of Commerzbank stepped down on Friday following demands from its second-biggest shareholder Cerberus that the German bank change its strategy to improve its financial performance.

The departures follow weeks of intrigue at the bank after the private equity firm — which owns about 5% of Commerzbank’s shares — attacked the company’s management last month.

Commerzbank is Germany’s second-largest listed bank and its biggest shareholder is the German Federal Government with almost 16%. Other significant shareholders include Capital Research & Management, BlackRock and Norges Bank Investment Management.

Commerzbank CEO Martin Zielke offered a “mutual termination from office to the supervisory board” and chairman Stefan Schmittmann resigned with effect from August 3, 2020.

Commerzbank said a committee of the supervisory board on Friday discussed Zielke’s offer to resign and would recommend the board accept it at a July 8 meeting.

Zielke said: “I would like to open the way for a fresh start.

“The bank needs a profound transformation and a new CEO, who will get the necessary time from the markets to implement a strategy.”

Schmittmann said: “The bank, the board of directors and the employees will face profound changes.

“This will take a lot of strength and effort, and should be free from repeated discussions over my role.”

Cerberus launched an attack on Commerzbank’s leadership last month — calling for “significant change at the supervisory board, the management board and the company’s strategic plan” to stop what it called a “downward spiral” caused by bloated costs, low profits and managerial inaction.

Commerzbank wanted to merge with its larger German rival Deutsche Bank last year but talks broke down — and the resignations could renew speculation of a merger.

Bloomberg has reported that the German government has also grown increasingly dissatisfied with Commerzbank’s share price performance under Zielke and commissioned consultancy firm Boston Consulting Group (BCG) last year to make suggestions on how to reshape the bank.

It is understood that Zielke has been working on another update to his strategy — including more than 7,000 job cuts. Some shareholders have been pushing for more radical cost reductions.

Analysts speculated that Roland Boekhout, who recently joined Commerzbank from ING Group, might be a possible replacement for Zielke.

Zielke said in a statement: “Under my leadership we set the course for a digital future for Commerzbank in 2016.

“With the take-over of Comdirect, we have laid the ground for developing an innovative and robust business model for the bank.

“Even if we made strategic progress, the financial performance of the bank has been and is unsatisfactory.

“And as CEO I bear the responsibility for that.

“As I want to assume this responsibility, I offered the mutual termination of my board membership to the supervisory board committee at its meeting today.

“I would like to open the way for a fresh start.

“The bank needs a profound transformation and a new CEO, who gets the necessary time from the markets to implement a strategy.”

Schmittmann said in a statement: “As chairman of the supervisory board, I fully supported all the strategic decisions of the executive board.

“Commerzbank’s 5.0 strategy has not found sufficient acceptance in the markets.

“Therefore I have come to the conclusion that I am responsible too and should take my share of responsibility.

“This is why I am going to resign.

“There are profound changes ahead for the board of managing directors, the bank and its employees.

“This will take a lot of strength and effort, and should be free from repeated discussions over my role.”

Commerzbank transacts about 30% of Germany’s foreign trade and calls itself the market leader in German corporate banking.

With approximately 1,000 branches, Commerzbank has one of the densest branch networks in Germany.

The bank has more than 11 million private and small-business customers in Germany and over 70,000 corporate clients, multinationals, financial service providers, and institutional clients worldwide.