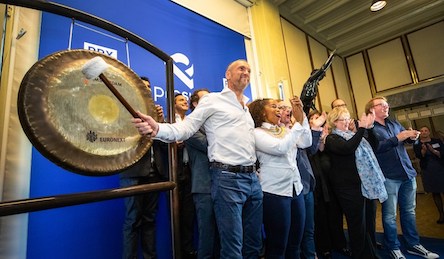 Shares of Prosus, the spin-off of South African e-commerce group Naspers, soared on their market debut in Amsterdam, valuing Prosus at €123 billion and making it one of Europe’s largest listed companies.

Prosus is made up of Naspers’ international empire of consumer internet assets — with the jewel in the crown being a 31% stake in Chinese tech giant Tencent.

Shares in Prosus opened on the Amsterdam bourse on Wednesday at €76 –well above an indicative price of €58.

The listing immediately made Prosus Europe’s largest consumer internet company and the third-largest stock in Amsterdam after Royal Dutch Shell and Unilever.

“With assets valued in excess of $100bn, Prosus ranks among the Top 10 consumer internet companies globally and is Europe’s largest by asset value …” said Naspers.

“It is a strategic investor and an operator of fast-growing consumer internet businesses, particularly focused on online classifieds, payments and fintech, and food delivery in markets including India, Russia and Brazil.

“Its ventures arm pursues new growth opportunities with investments in edtech and health, among others.

“Naspers will be the majority shareholder of Prosus, holding at least a 73% stake in the group alongside its South African businesses, Takealot and Media24.

“The remaining Prosus shareholding will be the free float created through a capitalisation issue, the results of which are expected to be announced on Monday, 16 September 2019.”

“We operate and invest globally in markets with long-term growth potential, and our companies and associates help improve the daily lives of around a fifth of the world’s population.

“The listing on Euronext Amsterdam provides a strong foundation for our future growth ambitions.

“We will continue to seek opportunities to partner with exceptional entrepreneurs who are using technology to address big societal needs, and to create value for our shareholders.”