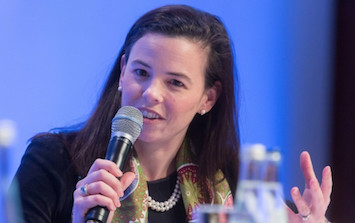 Deutsche Bank said on Sunday it has changed its leadership structure as part of its “radical transformation” that will involve scrapping its global equities business and scaling back its investment bank.

The move will involve cutting about 18,000 jobs.

Christiana Riley, Bernd Leukert and Stefan Simon have been appointed new board members.

Riley will take over responsibility for the Americas with immediate effect.

Riley has been chief financial officer for the company’s corporate & investment bank (CIB) since April 2015.

She will report to CEO Christian Sewing pending regulatory approval.

Simon has been a member of Deutsche Bank’s supervisory board since August 2016 and has been chairman of its integrity committee.

The responsibilities of the current board members will change as follows:

“To meet the anticipated challenges we need a management team that can not only execute against a demanding plan but is also capable of responsibly seizing entrepreneurial opportunities,” said Paul Achleitner, chairman of Deutsche Bank’s supervisory board.

“We are convinced that under the leadership of Christian Sewing this new team will succeed.”

Deutsche Bank said a new group management committee (GMC) is designed to “more closely link the management board to the divisions.”

Within the GMC, Stefan Hoops will oversee the new corporate bank.

Hoops has been at Deutsche Bank since 2003 and head of the global transaction bank (GTB) and head of CIB Germany since October 2018. He will report to CEO Sewing.

Mark Fedorcik will be head of the investement bank.

Fedorcik joined Deutsche Bank through Bankers Trust in 1995 and has had many investment banking leadership roles during his career at Deutsche Bank, including as head of GTB in the US.

Ram Nayak will lead fixed income and currency sales and trading in the investment bank.

He joined Deutsche Bank in 2009 after working for Citibank, Merrill Lynch and Credit Suisse.

Fedorcik and Nayak will report to CEO Sewing.

Manfred Knof will join Deutsche Bank on August 1, 2019, as the head of Private Banking Germany.

Knof had a long career at Allianz, including as CEO of Allianz in Germany from 2015 to 2017.

A long statement from the bank gave details on other major appointments.