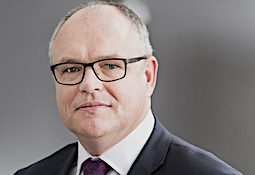 Kuhnke succeeds Kim Hammonds who, as previously announced, will leave the bank after this year’s Annual General Meeting.

Kuhnke will report into Christian Sewing, Deutsche Bank’s CEO “and will regularly attend the meetings of the Management Board.”

Kuhnke joined Deutsche Bank in 1986 and, since January 2016, has been Divisional Control Officer, Chief Administrative Officer and Head of Operations of the Private & Commercial Bank.

During his career he has worked across several business divisions and infrastructure functions in Tokyo, London, New York and Germany.

Deutsche Bank CEO Christian Sewing said: “In his tenure at Deutsche Bank of more than three decades Frank Kuhnke has proven that he is strong at taking decisions and executing them.

“He is able to systematically make complex processes and structures more efficient.

“Together with his team he will continue simplifying our bank’s technology and operations, cut costs and strengthen our innovation potential.

“We have been working together closely for many years, and I am looking forward to continuing our journey together.”