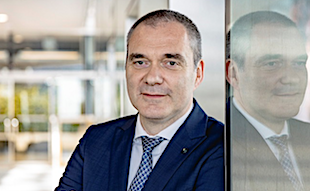 Sweden’s Assa Abloy, the world’s largest lock maker whose brands include Chubb and Yale, said on Monday it appointed Nico Delvaux as its new chief executive.

Delvaux, a Belgian, has been CEO of Finnish mining equipment maker Metso for only five months.

Effective June 18, 2018, at the latest, Delvaux will replace Johan Molin, who will leave his position after 12 years as CEO of Assa Abloy.

“With Nico Delvaux, we have found a strong and experienced leader of large global businesses with a strong track record,” said Assa Abloy chairman Lars Renström.

“He has managed complex and decentralized organizations and he has strong focus on innovation.”

Prior to Metso, Delvaux held management positions for more than two decades in the Atlas Copco Group, most recently as president of Atlas Copco’s Compressor Technique Business Area.

Delvaux, born in 1966, has a M.Sc. in Engineering from Free University of Brussels and an MBA from Handelshogeschool, Antwerp, Belgium.

Metso chairman Mikael Lilius said: “The board of directors is obviously disappointed that Nico has decided to leave Metso.

“However, the business plans and organizational changes that have been decided during the fall have the board’s full support and everybody in Metso will focus on executing these plans going forward.

“The board will initiate a search for a new president and CEO.”

Delvaux said: “I was offered a once-in-a-lifetime opportunity that I could not turn down.

“I have enjoyed my time at Metso and I’m grateful for the board and all the Metso people for the opportunity to work with them over the past months.

“Based on my experience, I’m confident that Metso has significant potential to drive profitable growth in line with its strategy.”